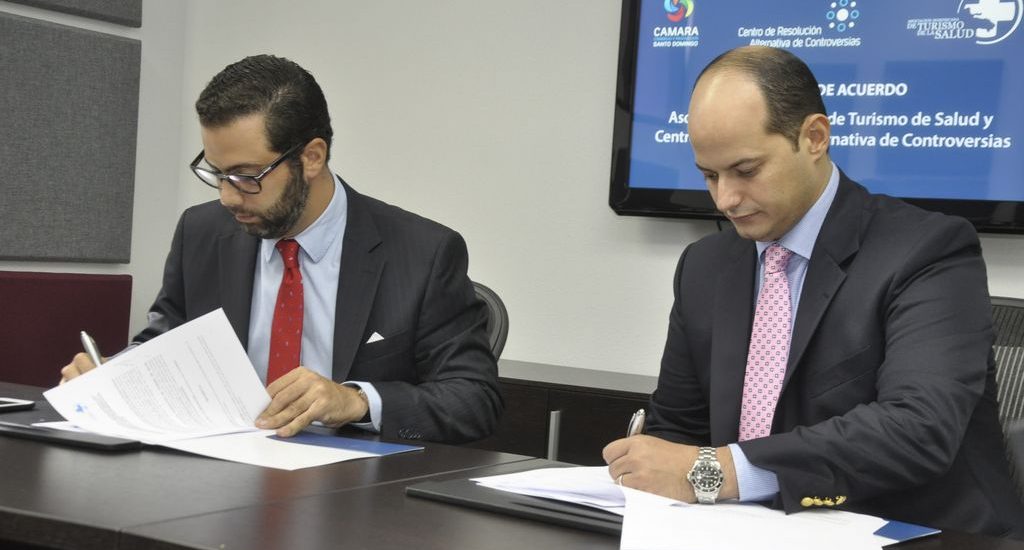 The Center for Alternative Dispute Resolution (CRC) of the Chamber of Commerce and Production of Santo Domingo and the Dominican Association of Health Tourism (ADTS) signed an interinstitutional agreement to work together to promote arbitration as a way principal for the resolution of conflicts raised in health tourism, providing legal security to the actors of the medical tourism value chain, through an efficient, expedited and cost-effective policy of dispute resolution in accordance with market requirements Globalized current.

The signatories were the President of the Executive Office of the CRC, Mr. Manuel José Luna Sued and Dr. Alejandro Cambiaso, President of the Dominican Association of Health Tourism. Through the agreement, the parties agree to promote an arbitration, transparent, accessible, objective and impartial forum to settle any process that occurs in the field of medical tourism, which prepares, develops and makes available a structure that allows users, consumers and providers of health tourism in the Dominican Republic of the use of commercial arbitration as a tool that facilitates the efficient and discrete resolution of disputes between local and foreign investors, consumers and users of health tourism in the country.

Within the scope of the Agreement, the Center for Alternative Dispute Resolution of the Chamber of Commerce and Production of Santo Domingo agreed to collaborate with the Dominican Association of Health Tourism, in order to provide advice and assistance to this institution and its members about of the Arbitration, Conciliation and Mediation procedures, through a training program on basic and priority issues for the promotion and dissemination of alternative dispute resolution methods. Likewise, committing to start with the creation of a list of expert and reliable arbitrators, specialized in the field, which constitutes a great step in favor of legal security for health and investment tourism.

Commercial Arbitration is a suis generis jurisdictional procedure, by means of which, by express will of the parties, the solution of transigible private disputes to an equally collegiate body composed of arbitrators is deferred, who are temporarily vested with jurisdiction to issue an award with the same legal category and the same effects as a judicial sentence.

The Chamber of Commerce and Production of Santo Domingo (CCPSD) is the oldest commercial chamber in Latin America. It is a non-profit institution that aims to promote the growth of formal businesses, dialogue and consensus between the public and private sectors; supporting the creation, development and business competitiveness in Santo Domingo and the country.